“Hope is the only good that is common to all men; those who have nothing else possess hope still” – Thales of Miletus

The Government of Sri Lanka announced just three days after the UN resolution on Sri Lanka, adopted at the 19th session of the Human Rights Council (HRC) in Geneva that it will implement only feasible recommendations made in the report by the Lessons Learnt and Reconciliation Commission (LLRC). However the Minister of Irrigation and the leader of the house, Mr. Nimal Siripala de Silva, did not specify what kind of recommendations the Government considers to be feasible.  In addition to that the Minister disclosed, that the government had decided to implement those recommendations long before the international community demanded that it do so. 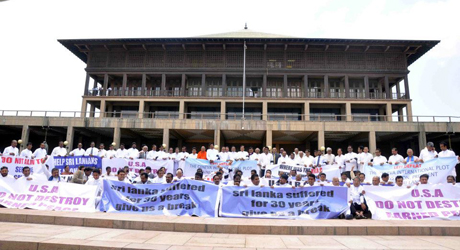 The Government ministers and MPs staged a sit-down protest in front of the parliamentary complex on 23 March, 2012. (Photo: AHRC)

This is none other than an old hide and seek political experiment in the Rajapaksa’s political laboratory that is trying to bamboozle the people and the international community yet again. In other words, the government of Sri Lanka is trying to find loopholes in  the LLRC report, which has made nothing out of  something. This is also the game the  regime has played with the Constitution of  Sri Lanka, to make it  a tool of social control, and an instrument to undermine people’s rights. In other words, our governments have created loopholes to deny the people the support and guidance of the Common Law and basic principles in our efforts towards freedom. The picture is quite clear; our politicians’ advantages are always the people’s disadvantages. In other words, the goals and the two never overlap.
In a press conference held on Monday, in Colombo,  the Minister for the External Affairs, Mr. Gamini Lakshman Peiris, recommended  that the Government of Sri Lanka should not fear the UN’s sanction against the country, after the UNHRC adopted the resolution at Geneva. His logic is amusing and confirms his child-like knowledge of basic strategies in foreign policy of other countries. What he has done is that instead of accepting failure of the regime’s whole process of conning each other, created a new kind of arithmetic logic to accept the termagant policy of the regime.  This cancer of an inconsequential termagant policy has been the cause of many lost opportunities to relieve ourselves from the pain of  tragic experiences in the Country, during the past few decades.

Not surprisingly, and something even an amateur would understand,  the UN is not going to promulgate economic sanctions against Sri Lanka just after it adopted the resolution because this is primary stage of the resolution and is the beginning of the ‘red alert’ against this country. What the government is trying to do, after the Geneva operation is covering their nudity locally after being stripped naked at the UNHRC.  There is no doubt that the government would not have received even those 15 votes if the bumptious lying government had exposed itself by denial of all LLRC recommendations in Geneva. Almost all countries excluding China, and Russia, who voted for Sri Lanka, did so because of their presumptions regarding the LLRC recommendations and distrust/anger against US policy makers who made the situation look bad. This is not a victory, but a shame on the government’s militarization of domestic and foreign policy.

There is no doubt that our politics is based on vendetta and racial nihilism. A few politicians did try the art of politics but were quickly eliminated by the more powerful parties. As a result of that elimination of political wisdom, we have allowed racial elements to alight the country with the fire of barbarism. Today, the problem in this country is how to bring order to a disordered social structure and to implement the Common Law that primarily accepts that everyone is equal before the law. But the current  regime has created a “dope patriotism” force towards denial of social justice, where they carpeted the space to play the power-ball game without any hindrance. What happened in Geneva is that, the humbugging power was questioned by the international community. This does not mean that the UN or the countries that supported the resolution are going to sink the Rakapaksa regime in the  Indian Ocean, but that they have sounded the alarm to policy makers in the country.

We do not have to go beyond our borders to know about the social destruction and agony of the people in the country. It’s before us and we are seeing it as part of our daily life. It was reported on the  same evening when the Minister of External Affairs and others who participated in the diplomatic blundering operation in Geneva, held a press conference to express their bumptious dopey views, that the ruling party regional politician was abducted, severely tortured and then dropped by the roadside.  He is former Western Provincial Councilor and a bother in law of the Minister of Postal services, Mr. Jeevan Kumaranatunga.

The victim said, “I was abducted by an armed gang on Monday evening, near Naga Viharaya in Kotte, Colombo, while I was travelling in my car and had been dropped off at a place in Wattala, the same evening.”

“They dragged me into the vehicle and started beating while asking for ransom of 50 million Rupees. I said I don’t have such amount, but they did not stop torturing me. Later I asked for their account number to deposit the amount while pleading with them for my life. Meanwhile, I heard another person just behind me in the same vehicle moaning and lamenting to help rescue his life while another man of the gang was beating him. Later they received two telephone calls before they drove the vehicle towards Negambo. Then they must have decided to drop me off at Wattala. But I don’t have any idea as to what happened to the other person in the vehicle struggling between life and death”, he recalls his horrifying experience.

In the same interview, he thanked Defence Secretary, Gotabhaya Rajapaksa, and others  of the Government for rescuing him so quickly. The question is what happened to the other person who was in the vehicle and how was the Defence Secretary involved in rescuing only one person’s life while another victim was also fighting between life and death due to the actions of the same gang. Who called the gang twice? Naturally every observer would conclude as per their own  thoughts that this is yet another piece of prime evidence that the Secretary of Defence might have direct involvement with those abductions, and extrajudicial killings which have been occurring during recent times due to elimination of all possibilities of genuine investigation. During the  first week of this month an attempt was made by the team of the Sri Lankan Army in a white van, to abduct the president of the Kolonnawa Urban Council. But we saw no investigations of the Sri Lankan army members who were involved with that plot due to political interferences. What would be a feasible recommendation to prevent these kinds of tragic criminal activities?

Here is what the LLRC recommended on criminal investigation, “there were strong concerns among members of public who made representations that criminal investigations, law enforcement, and the police administration have been adversely affected due to political interference resulting in an erosion of confidence in the criminal justice system.” (LLRC report- page 339) The government’s  behavior clearly confirms  that denial of any kind of genuine investigation and acceptance of most of the recommendations given by the LLRC, will not be seen by the regime, as being  feasible. Eventually the Government will undermine the people as planned earlier. If the government tries to solve the economic meltdown through ransom, then the dream for ‘wonder Asia’ will become ‘untenable Asia’.

The Central Bank, on Tuesday said that the Government is struggling to reduce the 1 billion dollar deficit as exports dip. The news report quoting the Central Bank, said that, “external trade in 2012 has begun with a nearly 1 billion U.S. dollar trade deficit due to a mixed performance with subdued exports and high imports”. Perhaps the country’s economy is already under fire due to wastage of  public money for the mess of pottage projects, under the  name of mega development to wonder Asia, and devaluation of local currency. It will be worse than earlier in coming weeks.

These problems cannot be solved by stealing ancient swords in the museum to do black magic to stay in power, but by using political wisdom and facing reality.  Unfortunately the government might believe that vulgarism is political wisdom and would force people into becoming part of  patriotic mythology. But as a result of avoiding reality, the whole society will become an awful reality again. What the people have to do is to restore the rule of law, to place the government back in the cage of law. Another thing is to stop falling for the myth of “dopey patriotism” which is eliminating all possibilities of actions against an unlawful abused power which cannot be questioned. It will not come as a surprise to anyone if the government says: “There are no feasible recommendations in the LLRC report to implement”.  (28.03.2012)