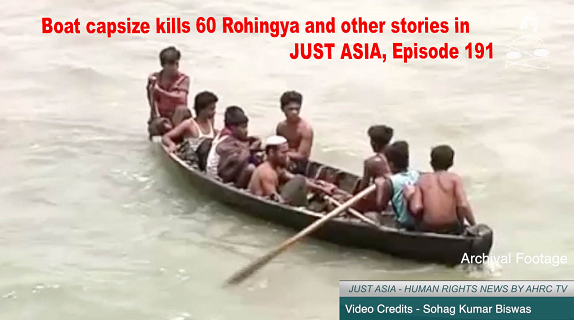 This week Just Asia begins with the death of 60 Rohingya in a boat capsize off Bangladesh on September 28, as they were fleeing violence in Burma. A UN spokesman said 23 people were confirmed dead and 40 more were “missing and presumed drowned”. Dozens of Rohingya have already died trying to cross into Bangladesh amid a military crackdown in Burma’s Rakhine state. Violence erupted in Rakhine on August 25 when Rohingya militants attacked security posts. More than half a million Rohingya have fled to Bangladesh since then. Just Asia speaks to Adhilur Rahman Khan, Secretary of Odhikar, regarding the situation of refugees in Bangladesh.

Next, the UN Special Rapporteur on Cambodia said the government must do more to protect democratic freedoms in the run-up to 2018 national elections. In a report submitted to the UN Human Rights Council in Geneva, Rhona Smith said, “deterioration of the democratic space and freedom of expression in Cambodia is a primary concern, with many NGOs and human rights defenders subject to threats, harassment, arrest”. Opposition leader Kem Sokha was arrested without a warrant in Phnom Penh on September 3 and accused of trying to topple the government with backing from Washington. He faces up to 30 years in prison if convicted.

In preparation for the 20th anniversary of the 1998 Asian Human Rights Charter, rights groups and activists are discussing how to move forward and ensure the genuine realization of people’s rights in Asia. The 1998 Charter was aimed at changing how human rights work was conducted in developing countries. In particular, the aim was to understand and improve the defective institutions and systems of justice required for human rights implementation.
Just Asia speaks to Basil Fernando, AHRC’s Director for Policy and Programme Development for details.

Moving to Indonesia, the country is seeing a rise in anti-Communist phobia and rhetoric, with a massive protest in Jakarta on September 29. Held by anti-Communist groups and opposition supporters against the Communist ideology, the protest was termed 29-9. The protest followed the brutal attack on the offices of the Indonesian Legal Aid Foundation (YLBHI) and Jakarta Legal Aid between 16 and 17 September 2017. These circumstances are weakening the efforts of victims and families of the 1965-1966 massacre to seek justice. They now face increased difficulties and obstacles to voice their hopes and desires.