ASIA: An Australian author’s exploration of disappearances in Sri Lanka 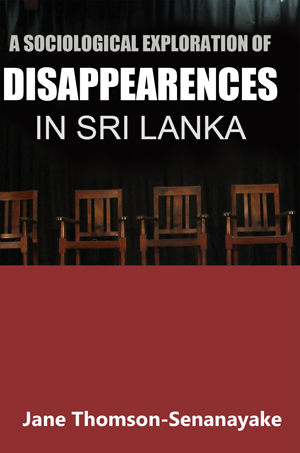 The AHRC announces the publication of “Not even a person, not even a word”, a sociological exploration of disappearances in Sri Lanka by Jane Laura Thomson-Senanayake.

This clear and compelling study meticulously documents three decades of history (1971-2002) as it relates to the terrible realities and consequences of disappearances in the island nation. The book, based on Thomson-Senanayake’s doctoral thesis at the University of Sydney, is amongst the most significant in-depth academic studies on disappearances, which considers the problem from a political as well as rights perspective. It is an original contribution to the subject of disappearances, a phenomenon that has played its part in transforming a democratic system in the ‘pearl of the Indian ocean’ to a system of repression.

The hypothesis of this study is that political competition was the motive behind the disappearances, serving as an integral part of a system of state power and patronage, enabling the political elite to immobilize all political opposition. The political manipulation carried out through abductions, killings, and the disposal of bodies by state agents, acting unofficially on behalf of the state, caused an immense transformation in the political system itself.

Disappearances in Sri Lanka have been facilitated by the displacement of legal provisions and the creation of other provisions that appear to have legitimacy. Within this context, an alternative apparatus has operated with impunity. Via interviews with 87 relatives of the disappeared, the study shows how relatives’ attempts to establish the socio-legal identity of victims was exploited, transitional justice mechanisms were manipulated, and justice was denied.

This study will contribute to local and global discourse on enforced disappearances. A major insight that it provides is in documenting the complete transformation of a democracy, without any kind of direct coup or military takeover. A rule of law system was undermined by the manipulation of rules, while a façade of legitimacy was maintained.

The Sri Lankan experience of losing democracy, and how a ‘shadow state’ has replaced a rule of law state, is an important political experience, relevant to societies across the world. In its analysis of complex processes by which a rule of law system has been displaced through a prolonged period of repression, the study is likely to find resonance within and beyond academia.

The book might also help promote such lines of scholarship, in what are usually termed less-developed countries, especially studies related to the political and social crises faced by these countries. The depth and scale of the problems detailed in the book exposes the nightmare Sri Lanka has become for so many. And, yet the study of such grim realities, itself provides hope that humans are capable of facing the truth, no matter how gruesome, with the aim of improving systems of governance and in the quest for justice.

« NEPAL: Council should exert strong pressure to bring a law that criminalises torture