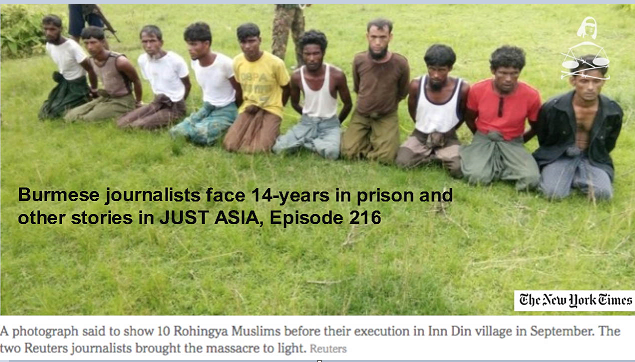 This week Just Asia begins with Burma, where two journalists face up to 14-years imprisonment under the country’s colonial era secrets act. The two Reuters reporters, U Wa Lone and U Kyaw Soe Oo, brought to light a massacre of 10 Muslim Rohingya men in Rakhine State’s Inn Din village. They were subsequently arrested in December 2017, after they were entrapped by police officers who handed them documents that they never even looked at. This week, the judge will decide whether the prosecutor has presented sufficient evidence for the case to go to trial.

Next, Indonesia’s corruption watchdog has named 38 Legislative Council members in North Sumatra as graft suspects. The watchdog is investigating a graft case involving North Sumatra’s former governor, who was found guilty last year of bribing legislative council members to smoothen deliberations on the provincial budget by the Medan Anti-Corruption Court. This case is one of many corruption cases involving local authorities in Indonesia.

Moving to Vietnam, six human rights activists have been sentenced to between seven and 15 years imprisonment. The Hanoi People’s Court gave the longest sentence to human rights lawyer Nguyen Van Dai, for “trying to overthrow the people’s administration.” The judgment comes amid a wider government crackdown on peaceful dissent that has seen several bloggers and human rights activists given long jail sentences in the last 12 months.

In India, the protests surrounding the dilution of the Caste Atrocities Act continued in many parts of the country. Another nationwide strike was called on Tuesday, this time by several upper-caste groups, to protest the earlier violence of the April 2nd strike. Just Asia speaks to Basil Fernando, director of programs and policy development at the AHRC, for his views.

Moving to Nepal, there is an alarming increase of rape in the country. According to police data, 711 cases of rape were reported in 2011-12, while 1644 cases were reported in 2016-2017. With many rape cases unreported, the actual number could be much higher. The reported ones are also manipulated or are not kept in police records due to pressure from people in power. While the rest of the world is talking about #MeToo, the conversation is reaching nowhere in Nepal.

In the Philippines, state security forces repeatedly blocked members of a fact-finding mission investigating human rights violations in Mindanao. Since their arrival at the airports in Davao City, Lagindinangan and Butuan City on April 6, all the way to highly-militarized peasant and Lumad communities in Southern Mindanao, Northern Mindanao and the Caraga region, members of the three-team mission were subjected to different forms of harassment and intimidation. President Rodrigo Duterte placed the whole island under martial law in May 2017 after an attack in Marawi.