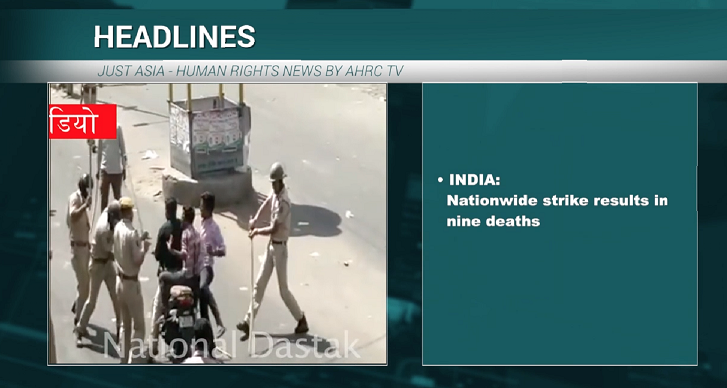 This week Just Asia begins with India, where a nationwide strike has resulted in nine deaths so far. The strike was called on Monday, to protest the changes to the Scheduled Castes/Scheduled Tribes prevention of Atrocities Act by the Supreme Court. The changes will make it difficult to file cases against public servants for caste atrocities.

Next, Pakistan’s Malala Yousufzai, the youngest ever winner of the Nobel peace prize in 2014, returned to her homeland five years after Taliban gunmen shot her in the head for promoting education for girls. While Malala said it was a ‘dream’ to be home, her whereabouts in the country were kept under tight wraps.

In Indonesia, an environmental activist has been sentenced to 10-months imprisonment, for apparently displaying a banner with the Communist hammer and sickle logo. The East Java province High Court sentenced Mr. Heri Budiawan, alias Budi Pego, on March 16. Shortly after the High Court’s sentence, Budi Pego’s lawyers declared their intention to appeal at the Supreme Court.

In Burma, U Win Myint, a 66-year-old former political prisoner, was elected president last Wednesday, following the sudden resignation of Htin Kyaw. During his inauguration on Friday, Win Myint said he would review the military constitution, implement democracy and uphold human rights. The new administration would also work harder to avoid corruption, end drug trafficking and correct the current affairs of the judiciary and legislature.