On the occasion of seventy-three years of independence, the Asian Human Rights Commission has published an online book entitled “Wasted Years – Short Essays on the 1978 Constitution”. 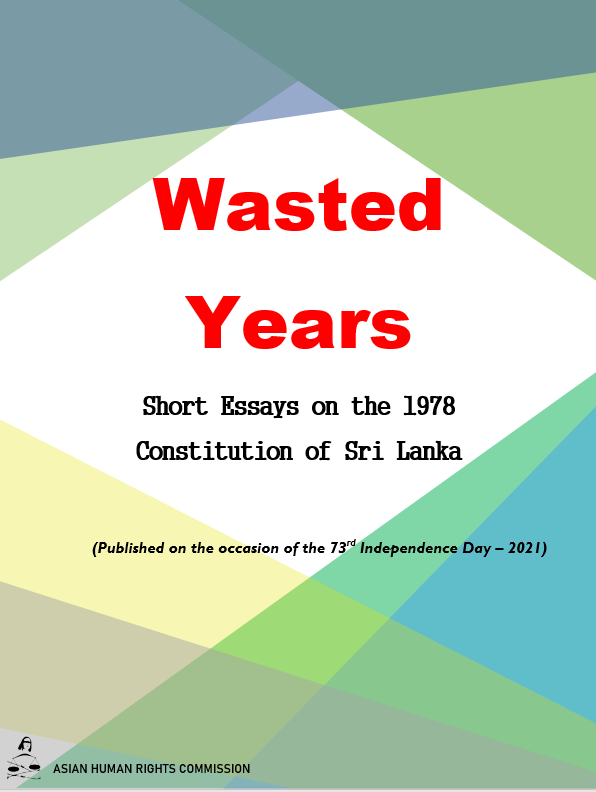 This online publication is a collection of many essays that were previously circulated in several publications. They covered a large array of topics. They related to the manner in which the democratic system (introduced to Sri Lanka at the time of independence) was subverted by various means in the decades that followed.

It specifically studied the impact of the 1978 Constitution on the displacement of the democratic foundations of Sri Lankan political, legal, and social organization. The tome illustrates how the idea of a locally generated Constitution was used as a propaganda tool in two areas, namely, the displacement of the Rule of Law and the protection of ALL peoples in society through an effectively functioning legal system.

The work handles important Constitutional concepts as well as narratives of historical events. These were staged in order to displace the Law-based system of Governance to an arbitrary form of Governance. Wasted Years will be a most beneficial input in understanding the depth of the crisis, in every area of life that Sri Lanka is faced within today’s world. Things considered in the publication include the economy, the peoples’ loss of faith in Public Institutions, and the loss of the alienation of people from participation in their country’s affairs.

WASTED YEARS, in addition, will make a fine contribution to the on-going discussion of the nature of the Constitution that is needed for the country today, if it is to come out of the abysmal situation it is in.

INDIA: The Bogey of Public Inconvenience to Snatch the Right To Protest »