Home / News / AHRC TV: Police shot patient being taken to hospital in the Philippines and other stories in JUST ASIA, Episode 202

AHRC TV: Police shot patient being taken to hospital in the Philippines and other stories in JUST ASIA, Episode 202 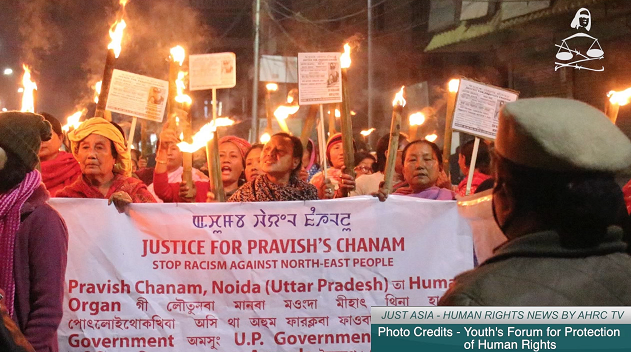 This week Just Asia begins with the Philippines, where the police killed two people, including a woman on her way to hospital, after mistaking them for gunmen. The incident occurred on December 28, when police were called to a Manila suburb following an earlier shooting during an argument between residents. The nine policemen involved in the shooting are being held pending an investigation. Just Asia speaks to Danilo Reyes, PhD Candidate, Asian and International Studies Department, City University of Hong Kong, for his views.

In Vietnam, a well-known Catholic human rights activist has been sentenced to nine years in prison and five years of house arrest for ‘propaganda against the state’. Maria Tran Thá»‹ Nga is the mother of two children aged three and five. She fought for the rights of migrant workers and victims of land dispossession. Her sentencing and the way the trial was held have been criticized.

Moving to India, the investigation into the death of Mr. Pravish Chanam has not progressed at all over the past three months. A resident of Manipur, Pravish went missing while he went to attend a musical concert in Nodia, Uttar Pradesh, on 8 September 2017, and was found dead on the next day, September 9. Various civil society groups in Manipur took out a torch rally at Imphal City demanding justice for Pravish. At the same time, six women leaders are camping in Delhi, demanding the case be handed over to the CBI.

Also in India, a fatal fire broke out on the top floor of a multi-storey building in Kamala Mills compound in Mumbai, killing at least 14 people. The fire started at a restaurant in the early hours of December 29 and spread quickly. Many persons were injured. It has been alleged that the restaurant failed to follow safety norms and ensure the presence of an emergency exit.

In Indonesia, there are calls for an amendment into the national law on the Judicial Commission, to allow the Commission to execute its recommendations. One serious problem faced by the Indonesian judicial system is bribery and corruption committed by judges. The last five years have seen 14 corruption cases involving judges. The lack of effective oversight mechanisms is the key problem.

Finally, Pakistan in 2017 saw an increase in enforced disappearances, extrajudicial killings, violence against religious minorities, and the harassment of bloggers, peace activists, journalists and writers. Violence against women in the country is unparalleled. Pakistan’s judiciary has proved itself subservient to the security establishment, and avoids addressing any abuse by the intelligence agencies. Despite its many pledges before the UN, the government has yet to criminalize torture.

« PAKISTAN: Call to arrest Provincial Minister for abduction and torture of Fishermen’s leaders

PAKISTAN: Peasant leader and lawyer disappeared from jail by the intelligence agency »