Good morning to all.

I have to be honest. I was saddened by the news that the prosecution of my employer will not be able to proceed because of insufficient evidence.

From the very start, I was afraid that this might happen. Because during the whole time, I was alone and only God is my witness to the things done to me. When I escaped even with the bruises in my body, I thought, ‘Who will believe me when no one else was around in the house’. At the same time I was also worried of my own safety. I have family that rely on me.

Nevertheless, I have fulfilled my responsibility as best as I can, as a good citizen, to report the crime committed against me. Unfortunately, I was in a disadvantage because what happened with me during the nine months of stay with my former employers was concealed within that household.

And this I say to my former employer: No one but you and I will ultimately know what really happened. So don’t say it is “ridiculous” or “false”. They were not made up and they were not lies. Even if my heart is heavy now, I know my conscience is clear. But can you say the same for your own conscience?

Now, I would like to thank all the members of the HK community—all the NGOs, migrant and local groups, who stood at my side, supported my quest for justice and assisted me during the more than seven months of investigation. During this time, I was unemployed and I had to rely on charitable assistance to ensure my well-being.

I would like to take this opportunity to thank the police investigators for exhausting all means to investigate the case. I would also like to thank the investigation and prosecution division of the Labour department for elevating the case to the Magistrate Court.

At least, I am happy that my former employer cannot employ a Filipino domestic worker and I hope that she cannot hire an Indonesian worker in the future as well.

I still hope that the truth will come out and justice will be served. I remember Erwiana’s case. She was not the first one abused by her employer. There are others before her. The employer did not stop until an Erwiana took the courage to come out in the open to file a complaint. To my employer, stop what you are doing to your domestic worker. It is inhuman. It is wrong.

I hope that my case will inspire others to report and speak out if they experience any abuse or exploitation.

Again, thank you for your support.

Rowena Uychiat: A victim twice over 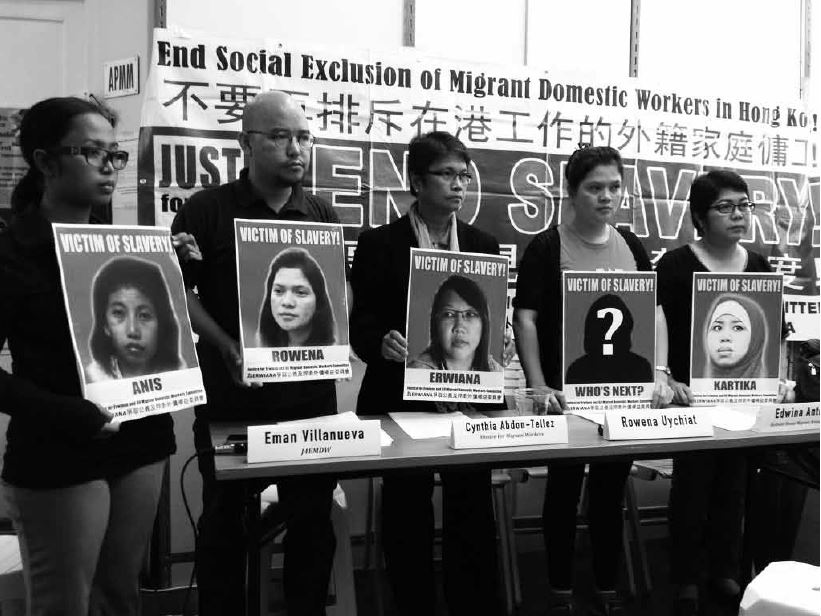 Rowena Uychiat is a victim twice over, first with the abuses she suffered while working and living with her employer, and now with the perversion and malicious twisting of the facts of her case and attempts to bury the truth.

Uychiat ran away from her employer last April because of the harrowing abuses she was experiencing including getting beaten with a wooden stick, getting her hair pulled, being made to work for almost 20 hours, and getting denied days off.

That Uychiat’s complaint last May was with merit was shown by the fact that the police did not out rightly dismiss her complaint but rigorously investigated.

Another point to consider was the action of the Labour Department to pursue the case up to the Magistracy.

Contrary to the claims by her former employer, non-prosecution of the case due to insufficient evidence is not tantamount to their innocence. The evidences may simply have not met the minimum requirement needed to merit a case in Court. But this does not totally discount the veracity of nor belie Uychiat’s complaints.

The difficulty of producing sufficient evidence is always a challenge in situations where crimes are being committed unseen by the public because they happen within the employers’ private premises. This is a dilemma that foreign domestic workers are forced to face and oftentimes difficult to surmount.

Rowena did what a good resident of Hong Kong must do and that is to call the attention of the police for any offence committed against a person. Whether sufficient evidence can be produced is not only the responsibility of the victim but more so of the concerned authorities so that justice can be delivered.

Foremost of the policies that make it difficult for FDWs to get positive legal remedies is the mandatory live-in employment arrangement. Such rule makes it possible for all sorts of abuses to happen very privately, which makes availability of evidence to prove maltreatment and abuse extremely difficult.

In a study that the Mission for Migrant Workers released last year on the mandatory livein policy, it was found out that 58 percent of FDWs suffer from verbal abuse, 18 percent experience different forms of physical assault, while six percent are sexually abused or harassed. Moreover, of the 7,000 clients assisted last year, an overwhelming 87 percent complained of long working hours while 11 percent suffered from various forms of maltreatment.

Many of the abuses remain unreported or evidences fade away due to the fact that enduring any kind of treatment is usual among FDWs just so they can hold on to their employment. They would rather suffer in silence because of fear that they cannot prove their case in the court of law.

Unfortunately, Rowena Uychiat is one of the victims failed by this system.

As what the Police indicated in their letter to Uychiat, the case will still be reconsidered if further information becomes available. This is what the MFMW is counting on and we shall be ready to continue assisting her so that justice can finally and fully be served.

At the same time, the MFMW urges the HK government to review policies that severely limit the fighting chance of abused FDWs for legal redress. As long as these are in place, such as the mandatory live-in arrangements, abused FDWs can and will be victimized again and again such as what happened to Rowena Uychiat.