On the occasion of the Right Livelihood Award of 2014, I was invited to write about Basil Fernando, one of five 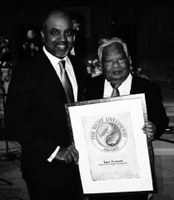 recipients this year. The focus was to be on certain areas others may not know about Basil, as well as the early years of the Asian Human Rights Commission (AHRC) when Basil, Louise Sun and I worked as a small team in a tiny office in Hong Kong, beginning the journey of a successful human rights advocacy organization. I thought I should start from our origins.

Basil and I come from the same place in Sri Lanka, Hendala. While he grew up in Palliyawatta, a very special place between a canal, river and the ocean, I grew up not too far away at Nayakakanda. We never met each other while we were in Sri Lanka however; I first met Basil when he arrived in Hong Kong, a very special place for both of us. Basil often told me how Hong Kong made a great positive impression on him when he arrived there as a young student activist in the 1970s. Hong Kong was that dynamic place in Asia, full of life and with endless possibilities. When he was compelled to abruptly leave Sri Lanka in 1989, the first place to come to his mind was hence Hong Kong. We met soon after he arrived; if I remember correctly, he was staying at Kowloon City and we met to discuss the ongoing extrajudicial killings and enforced disappearances occurring in Sri Lanka. At that time I agreed to assist in publishing a newsletter entitled Sri Lanka REVIEW, and hence began my progressive working relationship with Basil.

Even during those early days, I vividly recall his tremendous thirst to embrace new technologies. He invested in a very primitive laptop and made maximum use of it. It was one of those heavy laptops with a small monochrome screen and one single software named Word Star. He kept typing on it slowly with his two index fingers, from poetry to plays to articles. He would wake up at 2am to write a poem or a project idea. It seemed at times, that his mind never slept or rested.

While Basil left for Cambodia in 1992, I entered the City University of Hong Kong to study computer science. During my final year of studies, Basil left a well-paid and secure UN job in Cambodia and returned to Hong Kong to become the executive director of the Asian Human Rights Commission (AHRC). When I started working there part time in 1994, Basil told me my task was to make the AHRC an NGO maximizing the potential of cyberspace. During those early years, I had the technological know-how and Basil was the wise man who understood the politics of emerging cyber technology. His background and experience in printing and publishing enabled him to understand the power of being able to infinitely share information with the broadest possible audience through the Internet; of bypassing the monopoly of control exercised by mainstream publishers; and most importantly, of bypassing the control exercised by government censors. The AHRC thus became one of the first NGOs in the world to effectively use emerging information technologies from the mid-1990s onwards. The AHRC introduced its e-mail based urgent appeals system in 1996, while major human rights groups were still using fax and snail mail. It was one of the first human rights NGOs in Asia to have a robust web site, in 1995. Basil was not only keen to use these technologies from a regional human rights hub in Hong Kong but also to share this knowledge with rest of the human rights NGO community in Asia, from Cambodia to Sri Lanka.

I can clearly recall training NGO staff from organizations such as ADHOC Cambodia in information technology, from explaining the function of a keyboard, to building a simple web site, to conducting an advocacy campaign using email. It was a tremendous challenge to train NGO staff in the region. The first obstacle was the “fear of IT”. People were simply afraid of technology and computers. Computers were quite expensive in those days, so when NGOs acquired their first computer, staff were often asked not to touch it, as “it is expensive and if you break it, it will be a great loss for the organization, and if you touch it, it is very likely to break!” Only “qualified persons” were allowed to use it. I have seen NGO offices where the sacred computer was kept in a corner, covered by a plastic sheet. Our first challenge was to overcome this mindset and encourage senior NGO staff to allow younger staff to USE the computers. The AHRC used all possible ways to break such mindset. During our early training programs we shared and demonstrated how efficient and effective we can be by using new technologies. Basil was often quite blunt in suggesting the need to overcome the fear for technology, and that computers were there to be USED, and they would not break if you use them! I remember how all early AHRC interns from India, Sri Lanka, Cambodia returned to their countries with a heavy PC given to them by the AHRC, so that they could continue to communicate with us and the world. Finally, around 2000, we reached the tipping point when having an email address was no longer an exception, but a norm.

My greatest recollection of working with Basil at the AHRC was to understand IT’s potential for advocacy work. Keen to allocate the necessary resources to equip the AHRC with state of the art machinery and technology, Basil ensured that we were one of the first NGOs to hire a technology officer, back in 1998, to handle all IT related issues and also to progressively develop new communication technologies and systems into our work. Basil also had his own vision and ideas for developing a 21st century communications system for human rights advocacy. One such idea came to him in October 1998, less than six weeks before the 50th anniversary of the Universal Declaration of Human Rights. On that morning, Basil walked into the office and came straight to my desk and asked me how to build a graveyard in cyberspace. It took some time for me to understand what he was saying. “As disappeared people do not have graves on earth, shall we create a memorial for them in cyberspace?” Basil asked. Technically of course, I replied, it is possible to do this, and I began work on this project right away. We had over 16,000 names of disappeared persons in Asia at that time, and I hired an IT student to manually insert all those names into a database table to allow them to link to the web site. We created a small grave and candle next to each gravestone. We completed this task, with two persons working on the project, within four weeks. The web site www.disappearances. org was launched and brought a lot of media attention to the issue of disappearances at that time, including an article in Asiaweek magazine (a subsidiary of Time Inc) and a documentary on Asia Television in Hong Kong first, and later on Star TV.

Two aspects of advocacy work stand out during my time with Basil at the AHRC. Firstly, a ‘can do’ or positive attitude, and secondly, the sense of urgency in dealing with human rights abuses. The positive attitude helped to achieve the ‘impossible’ through innovation and fresh perspective, especially through using emerging technology. He put pressure on staff to get things done ‘now’, and not later. He often wanted statements, urgent appeals to be issued ‘right now,’ not tomorrow. Both these aspects are essential traits of a true human rights defender. When we know a person is being tortured right now at a police station, we need to act right now, not later in the day or tomorrow. In that sense, he was a tough boss. He worked day and night tirelessly. He is a passionate human being. Passionate to protect the dignity of human beings, especially those forgotten by the world and whose voice has been suppressed through centuries of social, cultural, religious repressions.

One other important thing I learned from Basil was not to dwell on petty issues, but rather see things in a broader context. This was an important thing to learn as a young professional. In the implementation of human rights norms however, Basil was very detailed in pointing out issues at the micro level and how to remedy them.

It was with genuine delight and appreciation that I came to know of Basil being awarded the Right Livelihood Award. The award is not only a recognition of Basil’s commitment to human rights, the rule of law and upholding human dignity, but also to the approach Basil introduced: of detailed implementation of human rights at the domestic level, in particular through justice sector institutions such as the police, prosecutors and judiciary. This approach was quite absent earlier, or not understood by traditional human rights organizations. I remember how hard it was initially to even talk about this approach. Many felt this was an area best left to governments. I really appreciate Basil and the AHRC’s ability to analyze dysfunctional justice systems and not just stop there, but step further and propose practical and implementable recommendations to relevant authorities. This approach was an invitation to engage and be proactive, despite it often being misunderstood as “doing the inappropriate thing”. The Right Livelihood Foundation has given recognition to this approach to human rights implementation.

Lastly, I want to say that I was very fortunate to have met Basil at a critical juncture of my life, when I was searching for which direction to take. I learned the basics of human rights from him. I also learned a fresh approach to human rights, focusing on implementation. This was essentially walking the walk on human rights. I also learned to experiment with the endless possibilities provided by modern technology to help the ordinary people, especially the poor, non-affluent and the marginalized in Asia. At the end, it comes down to people and their livelihood. People have the right to live their lives with dignity. That dignity has been lost or robbed of people. Basil has steadfastly worked for decades to return that dignity to people. The task is not yet over; however, he has inspired the future generation to continue to work towards such a noble goal. There, I see hope.