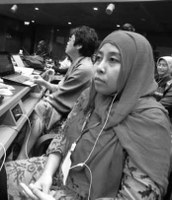 Indonesia on the sidelines of the Asian and Pacific Conference on Gender Equality and Women’s Empowerment: Beijing +20, Bangkok, Thailand, 17-20 November 2014.

Tell me about your professional work and the issues you are advocating for.

I am working for the Asian Muslim Action Network (AMAN) NGO in Indonesia, as a country representative. My work is mostly directing the organization to achieve its goals. We have been working on advocating for women’s rights, peace and security and the rights of minority groups in Indonesia, especially for Ahmadiyah and Shia groups who often face violent attacks by other groups.

At the grassroots level, my organization conducts peace education through a women’s school for peace. The school has helped women to better understand the basic concepts of peace, tolerance, women’s rights, and the skills of negotiation and mediation. The school also functions as a place where women can share their feelings and experiences, as many of them don’t have a private and safe space to share what is happening in their life.

What brought you to join this conference and what are the activities or discussions you are participating in here?

What is the status of women in Indonesia, with regard to equality at home and in the public arena?

Compared to 20 years back, the situation is better. When gender mainstreaming began in 2000, it was embraced by all ministries and resulted in the integration of all policies, which had significant impact. Indonesia passed a law on domestic violence for instance, which is bringing a lot of change. People are willing to report if there is violence happening inside the family or in public, as witnesses by the increasing number of reported cases. This also shows increasing public awareness.

We have made considerable progress in strengthening women’s empowerment through institutions such as the Ministry of Women’s Empowerment and Children Protection, the National Women Commission on Violence against Women, the Centre of Gender Studies and the women’s movement. These pillars are strongly growing to support women’s agenda.

We are also improving in terms of legislation to protect women’s rights such as gender budgeting, trafficking, children protection, domestic violence, protection and empowerment of women and children in conflict area.

What are the government responses and challenges?

The big challenge now is the influence of fundamentalism into policy making. The government must hence make it a priority to remove the 365 discriminatory local regulations, which are a barrier for women’s empowerment. The new government has a strong vision for people centred development, with women as an important target. Eight female ministers were appointed to improve the situation of women.

You are working on encouraging women to take part in peace work. Why this particular focus? Do you think women can bring something unique to issues of conflict and inter faith matters?

Yes. Women have great potential to bring peace, because their feelings and thoughts are constructed to nurture, take care of life. This is a big investment for society, although some feminists may not agree. But to me, starting with women to promote life will encourage the community to start thinking about promoting and saving life as well. Of course, men’s involvement is also important; it is not possible for women to promote life while men are ruining it. The peace perspective must actually be integrated in the teaching system in the family and the school.

Tell us about some of the women you meet in your work, their challenges and aspirations.

I met Rahima, living in a slum area of Jakarta. When I met her in 2007, she was very quiet and shy to express her thoughts and feelings. After joining our program, she has become a role model of the community, actively engaging and mobilising the community to effectively respond to its needs. She is able to talk in public, present the community’s views to the planning forum. Rahima strengthened the belief that through access to knowledge and skills, an ordinary woman can transform into an extraordinary one.

From my meeting with Kamala Chandrakirana, a UN expert on human rights, I was able to learn about UN procedures and how to advocate for people’s rights through these procedures. As a mentor, she helped me to understand and make use of UN documents, and play a role in global policy advocacy.

How do you see religion playing a role in Indonesian society?

What are the achievements of Indonesian women civil society organisations?

Civil society organisations (CSOs) in Indonesia are more mature today. We are able to influence many policies, while still struggling with controversial issues relating to minority groups. Many CSOs are also part of the country’s political movement. During the last election, one of the major CSO contributions was to mobilise support for the new leader and prevent the status quo ruling country. Women’s rights organisations are also growing and gaining a lot of success in terms of leadership and partnership with the government, and being accepted by the community.

What challenges do you face as a woman human rights defender in Indonesia?

There are still many intolerant groups who attack those they consider as deviant, including pluralist groups. Though the women’s movement takes a strong stand with this group, but there is still cause for concern. In many cases the perpetrators of violence could not be sentenced due to certain status; for instance, many perpetrators of violence against minority groups or women are public figures or military officers, who may use military courts. For this reason, it is important that the Commission on truth and reconciliation be re-established to end impunity.

What do you see as the biggest impediment to gender equality locally and globally?

Currently, in the context of Indonesia, the biggest impediment is the status quo; all those who gained benefit for many years, they may not agree with changes in favour of gender equality. Capitalists and market forces are another obstacle, as they are only concerned with financial benefit. While there has been some evolution of the patriarchal perspective into a more modern way to protect women, in fact it simply leads to the ‘domestication’ of women. The discourse to cut women’s working hours by two hours for instance, so that women can take care of the family. This got a lot of negative reaction and public resistance through social media, including direct twittering to the president and vice president to consider twice every policy they make to support women’s empowerment.

What would you say to those who believe that it is the system that is at fault, and once a proper system is in place, gender equality would come naturally? Or to those who say ‘feminism’ is merely a form of ‘man hating’, a product of ‘angry women’?

I think this is because of lack of knowledge. There is much propaganda about feminism. My observation and experience working with women on the ground shows that if we provide correct information, people will understand. At the same time, it must be noted that feminists are involved in deconstructing the root causes of discrimination and violence, which shakes up the status quo; many people therefore would like to suppress this movement, particularly those afraid of losing their power, influence and benefits.