Hong Kong’s Umbrella Movement: What next?

Hong Kong’s protests for democracy and universal suffrage, popularly known as the ‘Umbrella Movement’, finally came to an end after 75 days. Students and protesters had occupied key districts in the city, setting up ‘camps’, the last of which was finally cleared on December 15, 2014 through court injunction orders. The movement and the city have come a long way since police used tear gas and pepper spray to disperse the first protesters on September 28, who were calling on the government to do more to ensure genuine democracy, and free and fair chief executive elections in 2017.

The protests and occupation of key areas of the city led to dialogue between the students and government officials; the dialogue however, has left both parties at the end of each other’s spectrum rather than building a common bridge to resolve relevant issues. Hong Kong government officials continue to reinstate that the Basic Law cannot be amended to allow public nomination for the Chief Executive and the framework for the 2017 elections is not final. The students meanwhile, question why the Basic Law cannot be amended and recall the promise of democracy that Hong Kong people have been expressing for almost 30 years. Hong Kong’s Chief Secretary Carrie Lam has stated that there is no room for further talks because of the students’ ‘insincerity’.

“Almost every day here in Mongkok, we’re facing threats from the police on our front and triads from our back. And these threats have never been stopped. I was scared but I know that if I don’t come out now, our future will be more terrible. And we will all become victims by then. Hong Kong people are actually asking for a promise stated in the Sino-British Joint Declaration that we should have the genuine democracy. We’re simply asking for a promised democracy and we’re now paying a lot for it.” Lavina, High school student

There have been several issues fuelling the movement since its inception: police brutality against non-violent protests, Hong Kong’s rampant income inequality and the government’s perceived lack of concern for the ordinary citizen. Police use of pepper spray and tear gas on peaceful protesters was shocking to Hong Kong people, diminishing public trust in the city’s police force. This was made worse by the alleged beating of protester Ken Tsang in what has become known as ‘The Dark Corner’ by six policemen. Additional fat to the fire was Chief Executive Leung Chun-yin’s alleged hiring of triads to cause chaos and dissent among protesters in Mongkok, including groping a woman in public, cutting the knots that tie barricades and shouting at the protesters.

“On October 3, some triad members were beating up students. So I came to protect them. I knew roughly what the students’ purpose and ideas were and I admired them from the beginning…I felt this society was too dark. I think that when an ordinary person sees this situation, it’s gone too far, the government’s actions have gone too far. They have no humanity.” Protester

“I’ve been worried about my safety. About 2 weeks ago, people came to beat up people and destroy things. We are worried…[But] if we don’t come out, I’m afraid the next generation will have an even tougher time.” – Protester

While students have demanded an explanation regarding the police’s inappropriate use of force, Chief Superintendent Steve Hui Chun-tuk defended the police’s use of tear gas as ‘a way to stop protesters from charging at them’, terming it a “minimum” use of force. 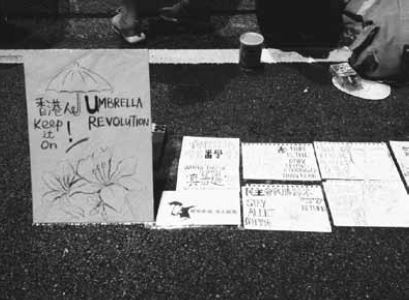 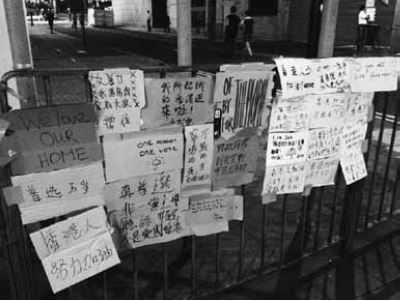 Hong Kong has long been facing high income inequality due to the political and business monopoly responsible for high property prices, and resulting in increasing numbers of people falling under the poverty line, such as those living in sub-divided flats or ‘cage homes’. This is where the students’ demand for universal suffrage somehow has its roots; with the abolishment of functional constituencies, there is hope that not only the market

will be tycoon-free, but the seats in the government as well. In the present system the chief executive is chosen by a committee dominated by business interests, whose focus is the market rather than the Hong Kong people. Under these circumstances, Chief Executive Leung Chun-yin’s comment in a foreign interview that democracy would give Hong Kong’s poor voice and power and be anathema to a capitalist Hong Kong dominated by business tycoons, caused great fury in the city, where nearly half the people earn less than HKD 14,000 a month. Unsurprisingly, this October interview caused Leung Chun-yin’s popularity to further decrease. It also resulted in a greater number of grassroots activists and people from a lower socioeconomic standing to participate in the protest. 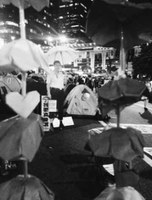 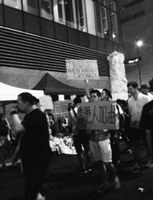 Many middle-aged protesters from underprivileged families have joined the movement wishing to change a backward system whose promise is starting to lose value. Figures and public opinion have also been changing. Compared to the 31.1 percent supporting the movement in September, 33.9 percent supported it in November, according to a Chinese University poll. Just 8.9 percent of Hong Kongers now identify as ‘Chinese’. In another poll by the University of Hong Kong, 70 percent of Hong Kongers think protesters should leave, out of which 39 percent think they could fight for democracy in another way.

A banner stating ‘I want genuine universal suffrage’ was put up by protesters in the peak of Lion Rock, which was taken down by the government after only one day. This sparked the beginning of other banners being hung from prominent buildings and structures across the city, particularly the six main Hong Kong universities, highlighting the will of the dominant student population. Furthermore, universities across the territory have now become a platform for political expression. Graduates from the Hong Kong Baptist University have begun their own strike, refusing to accept certificates from Albert Chan, the school’s Vice-Chancellor, after he refused to give a certificate to a student holding a yellow umbrella.

After the change of plans to ‘crash’ the APEC summit in Beijing, the Hong Kong Federation of Students (HKFS) and the Occupy Central co-founders decided to travel to Beijing on November 15 for a dialogue with Chinese President Xi Jinping regarding free elections. The three representatives would have been the Secretary of HKFS, Alex Chow and two other HKFS members who were also present at the earlier dialogue with the Hong Kong government dialogue, Nathan Law and Eason Chung, all with the mindset of ‘ready to be arrested’. Unsurprisingly, the three were denied entry into China. Tagged as persona non grata, their home return cards were declared ‘invalid’, although they were only told this as they were about to board the plane.

The Mongkok protest site was the first to be cleared, on November 17. An Injunction Order by authorities was enforced when a local bus company filed a complaint against the protesters because their business was getting affected by protesters blocking roads in the city’s business districts. Similarly, the police, bailiffs and the plaintiff of the Injunction Order joined forces to evacuate the barricades surrounding CITIC Tower, Admiralty. Although the protesters cooperated with the police, they did not evacuate the area, but only moved their barricades to another place.

Violence followed when radical protesters attacked the Legco building and damage occurred. Student leaders and movement co-founders strongly condemned the attack and emphasized that they were not responsible for the violence. The attack only served to increase friction between the protesters and the government.

In December, Joshua Wong, leader of the student-led group ScholarismHK, announced his intention to go on hunger strike, which he felt to be “the only way” to open a dialogue with the government. He was joined by two other students. CY Leung declined to meet the students and merely voiced that they should “take care” because of the cooling weather. Health issues and advice from his doctor led Wong to end his hunger strike after four days. He was seen in a wheelchair and only received one teaspoon of glucose. After a few days, the other hunger strikers also ended their strike. The government’s response was silence.

Following this, the police announced a mass operation to clear the main protest site in Admiralty on December 11, in accordance with the earlier court injunction order. Prior to the evacuation, hundreds if not thousands took to the site, a number not seen since the early days of the occupation, to take in the last daunting hours before the 11am deadline. The words, “We’ll be back” and “It’s only just the beginning” were heard everywhere, echoing that even if the site is taken away, the movement continues.

The clearance was termed a “beautiful defiance,” with student leaders urging protesters to continue the main principle of the movement, non-violence. Many of the protesters and pro-democracy lawmakers stayed in the sit-in protest until they were arrested by the police while the site was dismantled in front of them.

With the last Occupy site in Causeway Bay cleared on December 15, the 75-day occupation ended. Protesters have said however, that the Umbrella Movement is just a stepping stone for bigger means to achieve universal suffrage. The “Shopping Revolution” has begun in Mongkok and Times Square, Causeway Bay, where protesters imitate the three-finger salute, a sign made popular by the young-adult novel, The Hunger Games as a token of defiance against a tyrant government.

“In the year 2015, even though we can see civil disobedience movement to grow, I don’t think it will hurt our economy.” Eric Cheung, professor of law, University of Hong Kong

Indeed, the 75 days of the Umbrella Movement will be remembered as part of Hong Kong’s history. While the government may answer in the affirmative to, “Do you hear the people sing”, until when do people have to sing? And more importantly, how will the song end? All the parties involved would like the movement to end well, but for that to happend they must first be willing to look in the same direction, rather than at each other. Only then can they finally set sight on an ending for all the parties involved.

Jianne Soriano, 19, is a Filipino born and raised in Hong Kong. She is currently studying English for Professional Communication at City University. A 2013 Budding Poet laureate, she is also one of the first non-Chinese students to represent the Hong Kong youth in the 8th United Nations Internet Governance Forum in Bali, Indonesia.