PHILIPPINES: Notes on the trial observation of falsely charged activist

The Asian Human Rights Commission (AHRC) is sharing with you the notes taken during the trial observation of falsely charged activist, Temogen ‘Cocoy’ Tulawie. As mentioned earlier, the trial of Tulawie’s case had already been transferred to Manila and he is presently now detained in that city. After his trial was moved to Manila, the court that took jurisdiction of his case has been hearing his petition for bail.

UPDATED INFORMATION: (Based on the information received from Free Cocoy Tulawie Movement)

In the notes below, the trials were heard on February 4 and March 4 and 6, 2013. In reading these notes, keep in mind that they are in chronological order and the discussion follows the subsequent updates on the next hearing.

Also, for further details about the discussion mentioned in this notes, we embed earlier appeals for background information. 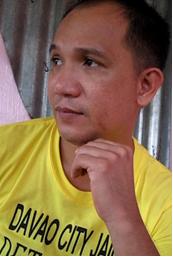 The court is schedule to hear Temogen ‘Cocoy’ Tulawie’s petition for bail and his request not to be transferred from the detention center in Davao to Manila for security reasons. Due to the information of the security and threat to life of the accused, the Bureau of Jail Management and Penology (BJMP) guarded the entire City Hall building, placing security forces at every floor to ensure security (for more details, please read: AHRC-UAU-001-2013).

Prior to this day’s hearing, it was reported that Juhan Albani Alihudin, the co-accused of Tulawie for charges of possession of explosive and for multiple frustrated murder and multiple attempted murder, was harassed and forced to sign a confession to implicate Tulawie. At that time, Juhan was detained at the Sulu Provincial Jail. Those who threatened him were Naser Irilis, the jail warden; and his assistant Balgabi Igasan, and a certain Idemar Irilis.

The three jail officers allegedly forced Juhan to sign a document he believes to be another confession against Tulawie. Juhan refused to affix his signature due to the absence of his lawyer and that he thought he would commit a sin against Allah by fabricating lies. As a bargain, the jail officers told him: “repent your sins later” and that “Governor Abdusakur Tan will offer you assistance after you sign.”

Juhan was illegally arrested, charged and detained during the declaration of State of Emergency in Sulu in 2009. This emergency had already been ruled by the Supreme Court as unconstitutional. He was transferred to Manila to appear in the trial of his case, similar to Tulawie.

When the hearing was held in Manila, Juhan, who is presently detained in Manila City Jail, was the first to arrive in court. Another accused, Abner Salahi Tahil, came later. Tulawie arrive wearing bullet proof vest onboard a vehicle of the BJMP with security escorts. He was taken to another entrance to prevent human rights groups from seeing him.

Here, the presiding Judge Marlo Magdoza-Malagar of the Regional Trial Court (RTC), Branch 19, Manila City, first tackled the petition to allow Tulawie to be detained in Davao City jail for security reasons. She raised two salient concerns regarding the urgent motion: first, will Tulawie waive his right to be present during trial assuming that his detention is retained in Davao City? Second: will he be detained in an alternative detention facility in Special Intensive Care Area (SICA), Bicutan City jail in case his petition is denied?

Atty. Sotto argued that there is no security risk against Tulawie considering that the Court of Appeals (CA) has already issued a Writ of Amparo and the Commission on Human Rights (CHR) already assured Tulawie’s safety. These reasons were also stated in the opposition that the party of Sulu Governor Abdusakur Tan filed. With regards to the alternative detention facility, Atty. Marlon Manuel, lawyer of Tulawie, raised the point that the CHR, was to conduct an Inter-Agency Meeting with Philippine National Police (PNP), BJMP, Armed Forces of the Philippines (AFP) and Department of National Defense (DND) on the matter.

In answer, Judge Malagar ruled that the parties shall put their arguments and defenses in writing and submit them to court. Tulawie’s lawyers were given 15 days from February 4, 2013 to answer the opposition filed by the prosecution panel. Also, the prosecution panel was given 15 days from receipt of the answer to file its reply. Then the motion will be submitted for resolution. After the parties agreed, the Bail hearing proceeded.

Tulawie’s lawyer argued that they have not received the affidavits as required in court order in December 7, 2012. The private prosecutor, Atty. Wendell Sotto, argued that affidavits were not applicable to the case because the Rules of Court, as he claimed, stated is applicable only to crimes with penalties of less than 6 years. Atty. Manuel, with a copy of the rules on hand, stated that the rules were applicable if the accused agrees to use the same irrespective of penalty. The accused in this case did not challenge the rules on requirement for affidavits

Due to the absence of the affidavits, the Court postponed the bail hearing to March 4 and 6, 2013.

On March 4, 2013
The private prosecutor, Atty. Vitaliano Aguirre, had asked to postpone the bail hearing on another date because the judicial affidavits required from them were incomplete and the lawyers were still to interview additional witnesses. In Philippines, this kind of reasoning by the lawyers–either from defense or from the prosecutors—are done deliberately to further delay the trial of a case.

For this reason, Atty. Mary Ann Arnado, lawyer of Tulawie, objected on the proposal to postpone the hearing as it would result in further delay. She argued there should have been no reason for the prosecution request for another postponement because as early as December 7, 2012, the prosecution knew full well that they needed to prepare the affidavits.

Lawyer Arnado argued the court had already given the prosecution over 60 days to prepare the affidavits until February 4, 2013 but they have failed to do so. She argued that to move the hearing on the same reason will violate Tulawie’s right to speedy trial. Atty. Arnado’s objection was granted by the court.

The prosecution presented its first witness, Mujibar Ali ‘Bong’ Amon. He is presently detained at the SICA in Bicutan City Jail in Taguig City. He was asked if he personally knows Temogen ‘Cocoy’ Tulawie, and he positively answered the same. He was asked by Atty. Aguirre to identify the other accused but Atty. Jajurie of the Defense objected on the ground that the bail hearing is only to determine if the evidence against Tulawie is strong.

In the Philippines, the purpose of the bail hearing is only to determine whether or not there is sufficient evidence against the accused, not on the question of guilt or innocence. However, the judge nevertheless stated that as long as the identification will point on the strength of the evidence, it will be fine.

Because the witness Mujibar could not speak Filipino or English, the cross examination conducted by Atty. Arnado during the hearing, slowed down the process. Here, Atty. Manuel manifested that the affidavits were written in Filipino, which could have meant that during the recording of the testimony, the language used that is comfortable to the witness is Filipino. However, Atty. Aguirre and Atty. Sotto argued there were two interpreters who assisted him during that time.

There was no available interpreter in the court room which caused the lawyers of the prosecution to invite some men from their party to stand in. In the Philippines, the accuracy of the testimonies of the witness could not often be articulated clearly for lack of interpreters. When the cross examination proceeded, Mujibar was not able to answer the questions properly because he had a hard time remembering. He asked for more time to remember the events.

The prosecution then proceeded to their next witness, Omar Lidasan, a policeman in Sulu. Omar was accompanied by an interpreter on the witness stand. In his testimony, he said he was on board the pick-up where Governor Tan was also in when the IED (improvised explosive devise) exploded in May 2009.

When Omar was asked to verify the affidavit in court and the signature therein was his which he confirmed. But when Atty. Aguirre asked him to identify the person of Temogen ‘Cocoy’ Tulawie, the latter’s lawyer Atty. Manuel objected because nowhere in Omar’s affidavit that he mentioned Tulawie’s name.

Here, Atty. Manuel asked Omar to illustrate their seating arrangements inside the vehicle when the explosion happened. Omar, however, was unable to clearly describe it. The public prosecutor then asked him to draw the seating arrangements and present it to court. The drawings were marked as exhibits, together with the signatures and affidavits.

On March 6, 2013
Tulawie’s lawyers have now received the set of judicial affidavits consisting of four affidavits from the prosecution.

As mentioned earlier, these affidavits had been required as early as December 7, 2012. The prosecution had also pledged to present 30 witnesses with their affidavits for the bail hearing. On March 1, they again submitted additional five affidavits, all written in Filipino.

« SRI LANKA: The latest report of the Office of the United Nations Human Rights Council

PAKISTAN: A fighter for the poor and disenfranchised gunned down  »