At 3am on 20 May 2014, General Prayuth Chan-ocha, the Commander-in-Chief of the Royal Thai Army, announced that martial law was immediately in force. After over six months of increasing political contention during which the military remained largely silent, they have spoken through this action.

Whether or not this constitutes, or will lead to, a coup remains uncertain at the time of this statement. While the Constitution has not been abrogated, the provisions of martial law are in direct conflict with the rights and liberties protected by the 2007 Constitution. In a statement several hours after the announcement of martial law, General Prayuth urged citizens to refrain from panicking and to carry out their lives as normal. The Asian Human Rights Commission disagrees strongly with the idea that martial law can or should be normalized. General Prayuth’s statement is at best, misguided, and at worst, facetious. There is nothing normal about martial law, nor the conditions of political and legal life that it creates. Martial law is a grave threat to human rights and the AHRC calls on General Prayuth and those under his command to respect human rights. 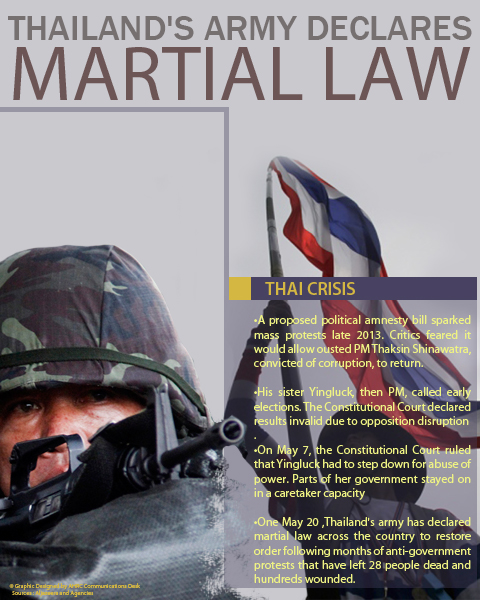 Despite the assurances from General Prayuth, the AHRC wishes to reiterate the wide scope for rights violations created under martial law. The law provides for censorship measures, wide-ranging search and detention, restriction on movement, and the imposition of a curfew, to name a few. While the full extent of the implications of martial law are still unfolding, at this time, there are soldiers in newsrooms, signals to political satellite and radio stations have been cut, and the print and online media have been warned not to disseminate any information which will disturb order.

The AHRC in particular wishes to highlight the danger presented by the detention provisions possible under martial law. Detention at irregular places of detention for up to seven days before evidence of wrongdoing must be presented is permitted. Detention in irregular places means that the possibility for rights violations, including torture, forced disappearance and extrajudicial execution is greatly increased. In southern Thailand, where martial law has been in continual force since January 2004, the instrument has been used to arbitrarily detain and activists as well as ordinary citizens.

The Asian Human Rights Commission urges all those concerned with human rights in Thailand to carefully monitor the ongoing situation. It also calls on General Prayuth Chan-ocha to immediately provide a justification for why martial law has been imposed, and in the absence of one, to revoke martial law immediately. Furthermore, in the event that the temporary introduction of these measures can be justified, it is beholden on the army to clarify how human rights will be protected under martial law, as well as to provide a timeline for the revocation of the measure and a return to rule under the constitution.

« PAKISTAN: An Ahmadi was shot dead in police lockup and the lives of others are under threat