Home / News / NEPAL: Ensure the maximum sentence to perpetrators who beat a Dalit woman and a journalist and smeared them with black soot

NEPAL: Ensure the maximum sentence to perpetrators who beat a Dalit woman and a journalist and smeared them with black soot

Maya Sarki was beaten, smeared with black soot, and garlanded with used shoes and slippers before being paraded in the village on 21 July 2013. She had to go through this ordeal merely for mistakenly blaming a man for an attempt to rape her. Maya apologized to Jivan Bhetwal, a local non-Dalit man for mistakenly pointing him out on attempt of rape. 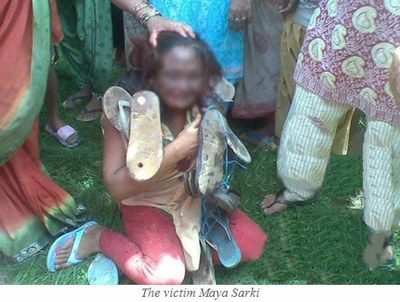 Maya Sarki was thrashed by a group of villagers, mostly by Jivan’s relatives and non-Dalit women on July 21 when she mistakenly blamed him for an attempt to rape her. The locals of Belabari Village Development Committee (VDC) of Morang District brutally attacked Maya Sarki, a Dalit woman and a journalist from the Dalit community, Manoj Bishwakarma, who is also the Chief Editor of Fight Weekly newspaper, which is locally published. He too was thrashed and smeared with black soot after he helped the victim file a case at the local police station.

The police called both parties to the police station. They found that Jivan was not involved in the sexual attack as Maya claimed that she had bitten the hand of the perpetrator during the assault before he ran away. Maya apologized to Jivan.

But it did not end here. The villagers took her to a public place and treated her brutally. They covered her face with black shoot and garlanded her with used shoes and slippers. They blamed her for charging Jivan for assault even though she did not have any proof, just to take revenge for past family issues. Then, the frenzied mob went to the house of Manoj and smeared his face with black soot.

When Maya and Manoj went to the local police station the officers delayed filing their complaint. Later, when the complaint was filed the police pressured them to accept an agreement with the perpetrators such actions would not be repeated again.

However, due to intense pressure from human rights organizations nationally and internationally, the police administration caught five of the alleged perpetrators, Jivan Bhetwal, Amit Bhetwal, Sewika Bhetwal, Chandrakala Bhetwal, Ambika Bhetwal and Kamala Bhetwal. The other 10 perpetrators fled the village. The District Court Morang gave their verdict to release those arrested on bail upon payment of NRs. 7,000 each. The Appeal Court Morang decided to increase the bail amount to NRs. 30,000.

It should be noted that according to the Caste Based Discrimination and Untouchability (Offence and Punishment) Law 2011, those who practice caste-based discrimination should be punished with a fine of NRs. 25,000 or 3 years imprisonment or both.

The victim woman and journalist have appealed against this verdict and asked for minimum of one year of imprisonment and compensation of NRs. 100,000 as per the law.

The AHRC therefore urges the Appeal Court Morang that is set to give its final verdict on February 9, 2014, to administer the maximum sentence of imprisonment and provide compensation as per the Caste Based Discrimination and Untouchability (Offence and Punishment) Law 2011 to set an example against those who practice caste discrimination.

« PAKISTAN: More than 100 dead bodies from three mass graves were found in one district of Balochistan